Below are simple instructions to get some extra mileage of students' sketches of class stories.  I acknowledge that this easy method using Powerpoint may be old news for many, . . . but, in case you didn't consider this option, I'm going to pass along this cool little feature of Powerpoint.

1. Take a photo of your class artist's sketches from one of your class stories. (added bonus - your student artist(s) get positive recognition for their work!)
2. Email it to yourself (or create the powerpoint directly on your smart phone)
3. Insert the sketches onto a powerpoint slide or slides.
4. Insert Text Boxes to number the sketches.
5. In the notes section (the white section below the powerpoint slide), write instructions and add numbers. Be sure to return after each number to allow sufficient space to write sentences. Don't forget to include a space for students to write their names. 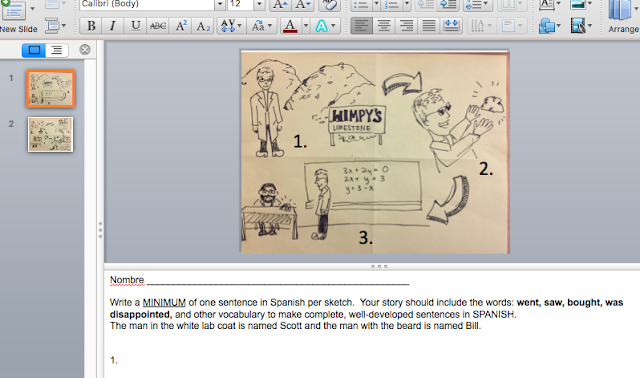 6.  Go to the Print function to print the slides. Powerpoint has 8 printing choices in the drop down menu.  They are: 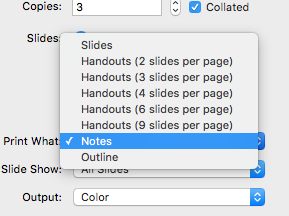 You will be able to see a preview of the document on the left (as seen below).  If you see that you didn't provide enough space between the numbers, make the adjustments on the powerpoint slide notes section before printing.

Below are two powerpoint slides made into a Written Story Retell paper that I distributed to the students.

Another option is for the teacher to type the story sentences directly on the powerpoint notes section as shown in the example below:

Here is a summary of my plans for the structures SAW, GAVE TO HIM/HER, WAS DISAPPOINTED (which are targeted in the story above). For a more thorough explanation, visit THIS POST from 2014.

1. The class & I created a story with the basic plot that someone wanted to give another person a gift so the character when 3 places, lists what the person saw, that he bought a gift and then gave it to another person, and the person was disappointed with the gift.

I projected the document "Graphic Organizer for Guided Storytelling" and as I told the story, the students provided the names of the characters, where they went, what they saw, to whom the character gave the gift. 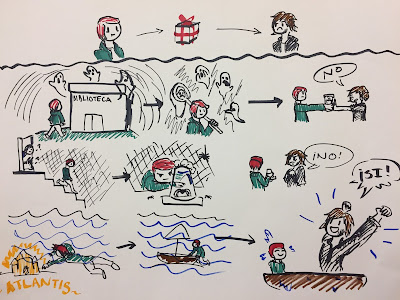 2. As were were creating the story, another student was drawing the story. We use the sketched story during our class review of the story because it doesn't have any words and the students are able to hear the target structures again - repetition in context!  The illustrations on the right are by the one and only amazing Ava K.
3.  We reviewed and retold the story using the sketches above and answered the questions written by the student question writer.

4. I distributed a blank Graphic Organizer for Guided Storytelling to students (pictured below). Students worked in pairs to create details of a different story and then they sketched the story. They rotated around the room and shared their stories with other groups of students.


5. One of the groups created the story with the illustrations shown in the first half of this post. I decided to put those sketches on a powerpoint point slide to get additional reps on the focus structures.
6. The following day I told the story with Scott and Bill as I projected the sketches from the powerpoint on the board.

7. I distributed the document (it was front and back) of the powerpoint slides that had instructions for the students to write sentences about the story.

8.  The homework that evening was for students to show their written story to their parents and to read it to them in Spanish.

In the book "Stepping Stones to Stories" by Ben Slavic, he lists SLOW as one of the five important skills needed in delivering comprehensible input to our students.  If I understand him correctly, the SLOW he refers to is the speed in which teachers talk to their students in the target language.  He writes, "Speaking to your students slowly indicates respect.  When you speak slowly you acknowledge that you appreciate how hard it is for your students to understand the new and foreign language."

SLOW is a difficult CI skill for teachers because it feels unnatural. It feels unnatural if you teach in your 2nd language and, even more so, if you teach in your native language! It requires a conscious effort and strict self-discipline, but it is necessary to (1) put our students at ease and (2) allow their brains the needed time to absorb the meaning of the message in the TL language at their own individual rate.

Without question, speaking SLOWLY to our students is crucial. But, SLOW is more than one dimensional.  The SLOW in the title refers to the pace in which we move through our lessons or our "curriculum".

Many of us introduce new structures and vocabulary to our students with PQA (Personalized Questions and Answers), followed by stories (TPRS) using the target words in context, and then reinforce it with reading and possibly a MovieTalk, or some other type of comprehensible input, to give additional repetitions of those structures. When we see evidence that the students "get it", we move on to new structures.

Wait.
Are you thinking, "isn't that what we're supposed to do?"
Well... yes, but.. I think there's an overlooked element to our teaching pattern and rhythm: We don't allow (sufficient) time for students to play with the newly-acquired language, if indeed it has truly been acquired.

Students need time to enjoy the feeling of success, of being able to respond to and use the new vocabulary and structures in a new context withOUT the pressure of new words added to the mix.  Allowing playing time with the newly-acquired structures sends the message: this material is important and I (the teacher) am going to allow you (the students) time to celebrate your growth and success and show off what you can do with it. Today we are going to take time to explore exactly how useful are those new structures/vocabulary.

In addition, by forging on too quickly with new content, we miss the opportunity to show the students the power of High Frequency Words (HFW) on which we base our lessons. If the words are HFW, there are a mountain of contexts in which we can provide additional exposure and reps of those HFW. Students may be amazed at how many conversations use words such as wanted, had, there was, was (location & emotion), etc. There's a reason they're called HFW!

Allowing extra class time to play with the language validates our choice of the HFW (found in the structures and vocabulary) on which we plan our lessons.  The extra time and CI will pay dividends, both now and later in the students' language journey, because they will have a more solid grasp of the words and structures they will encounter 75%, or more, of the time when communicating (listening, speaking, reading & writing) in the language.

Just as important, if the words we are teaching are High Frequency Words, by pausing a day, or two, or three, before adding new material, it makes it clear to all involved that acquiring those HFW is not only a good idea, but crucial in order to make steady progress toward the goal of fluency. It sends the message that NOW is the time to really make those structures part of each student, to make them really stick, for both the fast processors and the slower processors in the group. It shows our commitment to student success right now, in this lesson, in this moment, in the present, and... in the future when they move on to the next lesson, the next unit, or to the next language level the following semester or year.

If we allow that additional processing time and exposure through play time with the language, we help to discourage the yo-yo pattern of 2 steps forward, 1 step back (or worse, 1 step forward, 2 steps back) that can occur when too much is thrown too quickly at language students. The words that aren't fully acquired start to become jumbled with the newly introduced words, and before you know it, there's a cyclone of words and structures swirling in the students' heads and when that happens, trying to put things in any time of order becomes a huge challenge.

Please understand that "playtime with the language" is NOT wasted time. It's NOT "fluff". Putting on the brakes and choosing to go SLOW AFTER you feel comfortable with the students' ability with a particular set of structures allows the students to relax within the learning process, which lowers the affective filter, which in turn opens the door for students to make (even) deeper connections with the newly acquired structures.

Have you heard the wise old saying, "Haste makes waste"? It mean acting too quickly on something will actually slow things down.  There's a lot of wisdom in those three words. Heed the advice or be prepared for the consequences, which will cause frustration on both the teacher and the students' part, (at least that has been my experience, whether I was the one at fault or the "haste" happened before students arrived in my classroom.

This year I'm stepping up my efforts to be more attuned to my students' language abilities and needs. In other words, I'm striving to be honest with myself about what my students can and can't do in the language in relation to the comprehensible input they have been received, in my class and previously. I fully believe in recycling language - it's necessary and with HFW it's natural.  What I don't believe in is the need to "re-teach". If that need exists, I suspect it is due, in part or in whole, to the lack of the needed amount of comprehensible input and time to acquire the language at a previous time in the language experience.
Posted by Señora Hitz at 10:23 PM No comments: