With only 1 copy of La Casa de la Dentista last semester, I used a document camera and read the story to my students, along with sound effects and dramatic character voices.

This semester, I have a class set of the books and my plans for reading it went as follows. 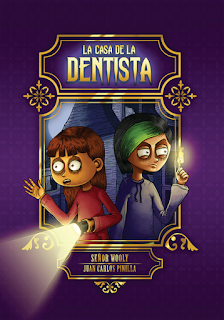 1. I showed the video to Seis Veces al Día when it was released in February and they have seen it several times since.

2. I used the powerpoint slides of the story from the Teacher's Guide of La Casa de la Dentista to read the first part of the book with my students. I designated two students in each class to be the 'sound effects technicians'. After reading the text on each slide, or for the slides that didn't have text, I paused to allow the students create the sound effects. In one class I held auditions for the sound effects, which really made the students up their game to be chosen for that job.

3. We read to page 54 on one day, and the following day we re-read that but at a quicker pace - both days using the powerpoint slides.

4. Today, students had to write 10 sentences to summarize what had happened thus far in the book. They said the sentences to me; I wrote them on the board; and the students copied what I wrote.  (This marking period, I'm making a deliberate effort to have students write each day - sometimes a few sentences, sometimes a paragraph or two.)

5. Then I distributed photocopies of teeth and students had to write two things on the teeth:
- What question do they have about what has happened?
- What do they think is going to happen. 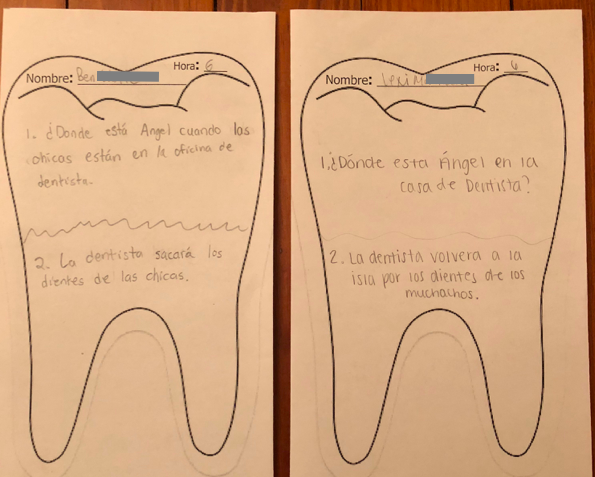 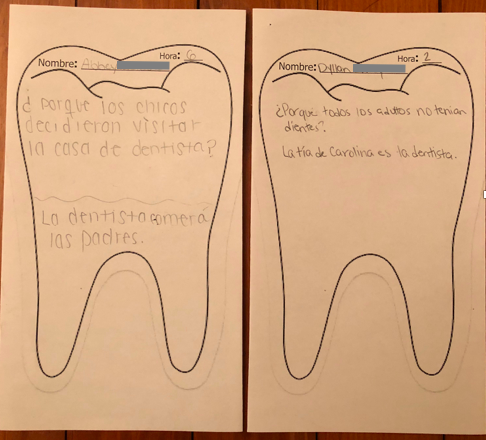 6. I read the students' questions and predictions and we briefly commented on them.

This is what ENGAGED reading looks like which is a reminder that is doesn't have to be SILENT reading.

8. When the student below finished, I heard her reaction to the book and then I asked her if she would share that reaction/opinion on video.  Then I showed her the note from Sr. Wooly on the last page of the glossary because she hadn't seen the note.
Make sure your students don't skip over that promising bit of information! 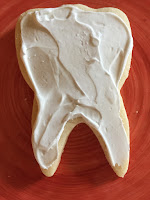 As I mentioned at the beginning of the post, the way we read the book this semester is different than before, and both ways were engaging and enjoyable for the students. However, I may tweak it a bit and implement a slightly different approach next time, PLUS I'll include the cookies again - something I did last time but forget this time. :(

Thank you Jim Wooldridge for writing a compelling story and for the sweet "promise" on the note in the glossary.
Posted by Señora Hitz at 7:27 AM 4 comments:

If you are not aware of the YouTube channel, TikTak Draw, and you teach Spanish, especially the upper levels, it is time to check it out. 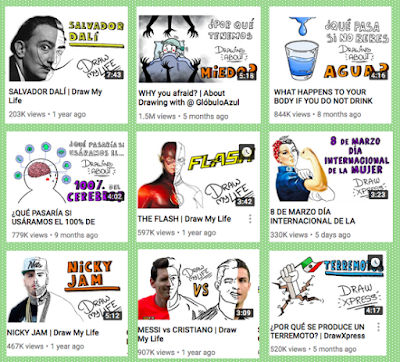 There are hundreds of videos (well over 400 videos) in Spanish! There are videos about famous people, holidays, popular cartoons, food, mythical characters (dragons & unicorns), mirrors (yes, on mirrors), animals, scene  heroes, legends, shoes, ninjas, Big Ben ... on pretty much ANYTHING!

Check it out - but, be forewarned, you may end up spending a lot of time on the site so set an alarm to monitor your time - LOL.
Posted by Señora Hitz at 5:01 PM No comments:

Up until January 2018, I was committed to creating newsletters for the parents of my students to keep them informed of what their son/daughter is doing in Spanish class. I used to spend h-o-u-r-s creating the newsletters, formatting the information into nice pretty columns, adding photos, and trying to balance the content on the two pages. 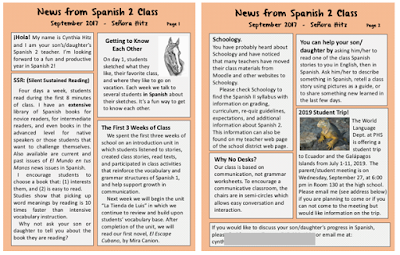 Pictured on the right is the September 2017 Spanish 2 newsletter. I was pleased with how it came out and the information that was shared until I talked to a parent that mentioned, yes, he had received the newsletter by email, but he didn't have the time or take the time to read it yet.

That's when I realized, I would have done the same thing if my son or daughter's teacher would have emailed a two-page newsletter to me. It doesn't make me, or you, a "bad" parent, because if it would, be assured there would be many "bad" parents.  Who has time to read newsletters these days? People are more likely to watch a short video than to read two pages about their child's class.


Last month I went to PETE & C, a tech conference held in Hershey, PA. The first session I went to was a presentation about Apple's Clips app. It took roughly 25 minutes of the hour presentation for the presenter to create a short video that could be shared with parents about a recent field trip, and, he did that while explaining the steps and the app to the attendees.

A few days later, my colleague, Krista Kovalchick, showed me a practice "clip" that she made at home wth the app. After that, I decided it was time to experiment with the app.

That was about three weeks ago and since that time I have made two parent "newsvideos" which have garnered more responses and comments from parents than I have in the last five years of writing newsletters.

HERE is an example of a Clip I made, specifically for this blog. The actual videos I sent to the parents are better with short clips within the video of the students singing, collaborating on a project, participating in an author Skype with Mira Canion, and loads of photos of class activities. (Since they are created specifically for parents, I have more freedom to include photos and videos of the students.)
Apple's Clips app has been described as the iMovie app for the next generation. I like to think of it as the iMovie for the older generation because it is much more user-friendly than iMovie. There's less of a learner's curve which means you can create videos in less time and with less headaches.

For my next parent newsvideos, I'd like to include a few clips of students' commenting on the book the read, or a fun activity they did in class, or a few sentences of a story retell.

Some of the features of the Clips app are:
- animated text
- emojis
- fun stickers
- Star Wars, Disney, & Pixar characters
- artistic filters
- music for background (that automatically fits the length of your video and lowers the volume when there is other sound on a video or slide)
- and the ability to easily share the video
There are even more cool options with the updated version for those who have a  an iPhone 10.

Using the app for parents "newsvideos" is only one small application for this app. I know you'll have fun using the app and finding other classroom uses for it.
Posted by Señora Hitz at 9:43 PM No comments:

Resources for International Women's Day or Units on Women

Are you looking for resources for a unit on women, or more specific on Hispanic women, to showcase their role in history and their contributions to society in science, medicine, exploration, sports, etc?

In my Spanish 4+ class, I have a unit simple titled "Las Mujeres" which introduces my students to several hispanic women that they most likely are not aware of, and also provide reading material for them in Spanish on women that they have learned about in their other classes such as art, Frida Kahlo; social studies, Sonia Sotomayor and Marie Reiche (originally from Germany); science, Ellen Ochoa; and music, Gloria Estefan & Celia Cruz.

These are some of my favorite sources and how I use them in class: 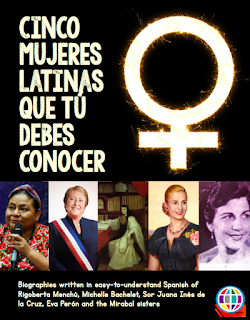 This is a resource from The Comprehensible Classroom (Martina Bex), that I purchased from TeachersPayTeachers last fall. The biographies are of Rigoberta Menchú, Michelle Bachelet, Sor Juana Inés de la Cruz, Eva Perón, and the Mirabal sisters.

First, I printed out the pdf of the powerpoint slides and posted them around the room.  I divided the students into five group, with 2-3 students per group. (I used this with my small class of 13 students. **For larger classes, read the comment at the end of this section for suggestions.) Then I gave each group 5 pieces of construction paper - each group had a different color.

Each group went to one of the posted photos and information and read the information. Then they decided which fact/sentence from the information they wanted to sketch on the construction paper. They completed the sketch, underlined the phrase or sentence that they sketched, and taped their sketch next to the posted information.

After students had circulated through the five stations, they returned to their seats and we talked about each women, with one person from each group explaining how their sketch related to that woman's life. 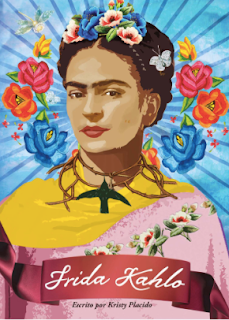 The novel, Frida Kahlo, is the backbone of my "Las Mujeres" unit. It is a 58-page biography about Frida Kahlo in which Kristy took care to include aspects of Frida's growing up years that will be of special interest to high school students (such as Frida caring for a family of rats, the mischievous acts at her school, and her struggle to "fit in" with high society).

This is the first semester that I have the Frida Kahlo Teacher's Guide from Fluency Matters to use when reading the novel. It is packed full of extension activities, Can-Do Statements, comprehension questions that elicit higher-order thinking, Reader's Theater scripts and a fun, interactive section called Shake it Up! and more. To my surprise, I only realized after using the teacher guide for a few chapters that there is also an Online Supplement to the Teacher's Guide, especially useful for teachers in 1:1 schools. You don't need to come up with the ideas - they're all provided for you with detailed explanations. You'll save yourself hours of planning time with this resource!

In addition to the Teacher's Guide, many teachers have freely shared their ideas and activities to go with this novel. The first two are my current favorites and the others are additional resources to check out:

The Feisty Language Teacher - Frida! Frida! Read All About Her! 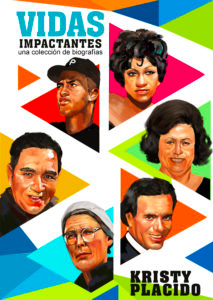 Vidas Impactantes, by Krista Placido
Vida's Impactantes is another novel in which you will find biographies of hispanic women that have made a notable impact on society. You'll find information on Celia Cruz, Maria Reiche, and Azucena Villaflor. I've read this book, several times, and I'm in the process of pulling biographies of several people and inserting that into other Spanish 4 and Spanish 4+ units. I don't have the Teacher's Guide yet, but I know it will also be an invaluable resource.

As a side note, as you can see by the photo of the book cover on the right, this book also has 3 biographies of hispanic men!

A-Z Reading resources
If you have a subscription to A-Z reading, you automatically have a nice selection of online readers of famous women.  My students do SSR several times a week in which students choose a novel to read. During two weeks of the "Las Mujeres" unit, I request that students read the stories on A-Z reading (you can print them out or upload a pdf of the books to a learning management system such as Schoology). 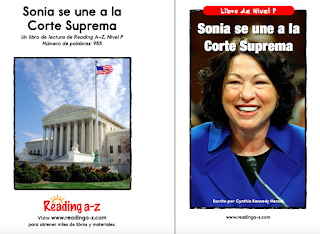 I'm sure these resources are only the tip of the iceberg!
If you have favorite resources related to hispanic women, please share, as I'm always open to learning!

Posted by Señora Hitz at 4:57 PM No comments: