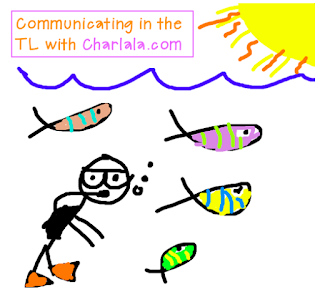 Don't you love it when someone creates a new tool that, as soon as you learn about it, your mind starts thinking of numerous ways you can use it in class? That's what happened when I first saw a tweet about the website Charlala.com.

I predict that after learning about Charlala.com you are going to wish you had more days of school with your students. Yes - Really!

Charlala.com is a website created by Chris Hammer, a world language curriculum specialist and a grade 2-8 Spanish teacher. Charlala.com has several features but the one I'll focus on in this post is the DrawRoom with Game Mode and Conversation Mode. (Other features of the site allow the teacher to create a video in which the teacher records himself asking a question and then sets a time limit for how long the student has to answer the recorded questions, somewhat similar to what CLEAR by Michigan State University used to have.)

I used the DrawingRoom in Charlala.com with my students for the first time today and it was a big hit. These are the various ways I used this site:

1. WEEKEND CHAT
The first day of the school week, I start class with a Weekend Chat. There are probably 101 ways to do this, but with Charlala.com there are now 102 ways.

I told students that we were going to chat about the weekend, but we were going to use the iPads to draw. That alone prompted some cheers. I projected my screen with the web address and the # for students to enter the DrawRoom. Then I gave students the prompt (in the TL of course), "What did you do this weekend that was your favorite activity?" Students sketched their answers, then I projected them and we talked about each of them, asking more questions and giving students additional input on each of the activities we highlighted.

In a different class, I asked students what was their favorite activity and their least favorite activity. They drew both of them on the same sketch. Below is a screenshot of some of the responses and how that appears on the teacher screen.

2. LEARNING ABOUT CLASSMATES
There were 11 students in one of my classes, so I asked them to draw what they hope to do before they are 30 years old. (I explained the prompt in Spanish, the target language.) But this time I did not want them to see the names of their classmates above the sketches, (see above for an example), so I did not project my screen. As students submitted their sketches, I downloaded each one (it's a SNAP to download the submitted sketches) and I transferred them directly on a powerpoint. 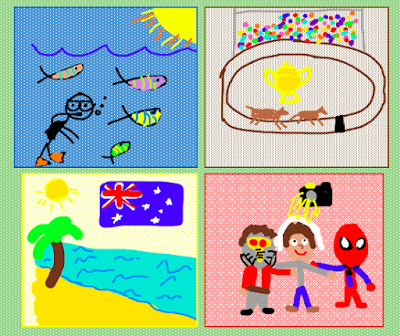 After all the sketches were submitted, I told the students to number a paper 1-11. I showed all of the sketches to the students so they could preview them. Then I started with the first sketch and directed students to write the name of the person and what that person wants to do before they are 30. Example: Peter quiere ser el presidente de los EE.UU. (Peter wants to be the President of the United States.)

Note: To be clear, the collage of the 4 sketches on the left, I added the colored background when I put the sketches on the Powerpoint slide. If students want a solid color background, they have to add that in their drawing.

After students wrote a short sentence for each sketch, we went back to #1 slide and I asked students who they had guessed for #1. If it was wrong I asked the incorrectly guessed student what s/he had as an answer. Each time the students were hearing reps of the sentence. This would be great at any level! 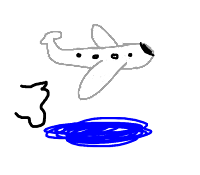 If the students are not able to write the sentences, the teacher can project his computer screen and then describe a sketch and students guess which sketch is being described. If you don't want students names on it, you can download the sketches and put 4 or so on a powerpoint slide.

3. REVIEW A NOVEL (or Other Text)
My Spanish 4+ students are reading 48 Horas by Carrie Toth. Before the 3-day weekend the students took their writing and speaking part of the final with the seniors, which means when we returned from Memorial Day Weekend, we hadn't read the novel for several days. To review the novel, I opened the DrawRoom for the students and told them to sketch something that happened in  chapter 1-10.

After students submitted their sketches, I clicked on the sketches and asked students what they thought the sketch depicted. It was a novel way to review the novel! Several of the sketches are shown below.

By the way, if you don't have the novel, 48 Horas, I strongly recommend it! 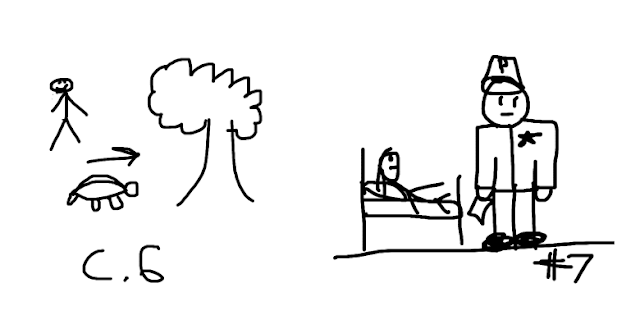 4. PREDICTIONS
When reading a novel, students can draw their predictions of what will happen next. The sketches give the students the ability to share their opinions without the language barrier and also provides the opportunity for the teacher to talk about the predictions in the target language.

You can use Charlala.com in place of activities when you used to have the students draw on paper. I'm not suggesting that you completely eliminate drawing on paper, students of all ages enjoy that from time to time, but if your administration is expecting to see use of technology when they observe your class, the Charlala.com website makes it possible. The best part is that you can easily share the sketches with the whole class AND you can download the sketches to use on other documents and to review at a later date.

5. STORYTELLING and TPRS STORIES
I attended an hour webinar hosted by Chris Hammer this evening in which he demonstrated how Charlala.com can be used when telling a story to the class. During the demonstration, Chris chose several sketches as the "masterpieces". If you continue to choose a masterpiece for each section of the story, after the story is completed you can download a pdf of the sketches and use that document to review the story the following day, for the students to use the sketches as a retell, or possibly to complete a Write and Discuss with the sketches on a document of the students to write on.

The screenshot below shows the masterpieces on the right upper corner.

After closing the DrawRoom, you will have the option to download the pdf.

Ohhh, the possibilities! It's easy to see that this new tool (which I think Chris first introduced it in August 2018) will be useful in the ways I outlined above and many other ways.

This spring, when the administrators were working on the teaching schedules for the 2019-2020 school year, I requested to have some Spanish 1 classes to work on the curriculum. (You can't imagine how difficult it was for me to give up my level 2 students for one year, but I felt it was in the best interest of the program, regardless of how much I would miss teaching that level!) Anyway, I am looking forward to using this website with my Spanish 1 classes in the fall, as well as my upper level classes.

The site is currently in Beta. I suggest you spend some time this summer checking it out and exploring the possibilities. Chris Hammer, the creator of the site, welcomes feedback from teachers and is quick to respond to those suggestions. He is constantly improving and updating the site. In this evening's webinar, he mentioned several updates that they will work on over the summer and I'm sure that it will be even more AMAZING when the new school year rolls around.

If you have some great ideas on how you will use this in your classroom, I would LOVE to hear about them.

I don't know if the warm spring weather has transformed my students into  verbally appreciative readers or if there's some type of reading vortex swirling through Palmyra, PA, but something strange this way comes. Something is nudging my students to be extra complimentary about their SSR books. Whatever it may be, I'm loving it.

Students, on their OWN, are commenting to me how much they like the books they are reading independently during SSR (Sustained Silent Reading).  In three days' time, I had several students tell me about their book or recommend to another student to read the book they're reading.

Starting a SSR program in a second language requires you to be diligent and consistent in your expectations, but it will be worthy your time. Eventually, the students will learn to enjoy and appreciate that reading time; at least I've found that to be the case for the majority of the students!

The books that my students raved about last week were:
`

1. El Escape by A.C. Quintero
The 11th grade male student said: "This book is really good."   I have observed this student many times during SSR in the last 3 months in which he was staring at the floor instead of reading, 'reading' on the same page for the majority of the 10 minutes; and sleeping. Since he started to read El Escape, his reading behaviors have changed and he spends the full 10 minutes reading.

I told the author, A.C. Quintero, and she said she wrote the book especially for boys that don't want to read romance books.

5. El Armario by A. C. Quintero
El Armario is the second book in a trilogy. The student did her Book Talk on this book and said it was her favorite book. The following day she asked me for the sequel to El Armario, which is Las Sombras.
(The first book in the trilogy is Las Apariencias Engañen but other students were reading my two copies at the time, so she skipped the first book and read the second book. She said it was a little confusing at the beginning since she didn't read book #1, but it was so compelling and interesting so she continued reading.)

You can find the above readers at the author's websites, or Amazon, or Fluency Matters.

If you do not have a SSR program in place, I strongly recommend that you consider it. Finding funds for a class library can be a challenging task, but many teachers have been creative and persistent in searching for funds and reading materials and they now provide this opportunity for their students.

Posted by Señora Hitz at 4:14 PM No comments: