Describing Characters in a Story 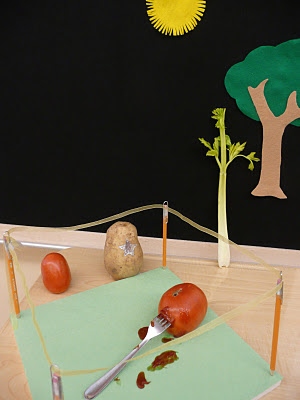 Episode 7 of "Cuentos de Ensalada" (the story I'm working on with my Spanish 1 students) has so many important events that I wanted to make sure the students had a fresh review of the characters and their names before presenting the action-packed episode.

I don't tell one episode a day because I need to take a day or so to pre-teach vocabulary that students don't know. Also, episode 6 gives information about the daily routine of a character that is not mentioned in episode 7. Therefore, it had been several days since my students heard about the main characters and I felt they needed an activity to review facts about the characters in order to appreciate episode 7 to its fullest.

As you can see by the photo, the events in episode 7 are a major part of the soap opera. (By the way, the props and script are clearly described in the book.)

If you have a dramatic side of you trying to get out, this episode will allow you that creative part of you to break through - especially when the friends of Tomás "llora". I believe the neighboring classes may have heard my interpretation of that!

My plan was to type an activity for the students to read to review the characters, BUT I ran out of time so I thought I'd just verbally review the characters with them. Fortunately, when the students were reading the previous episodes to their partner, an idea came to me and it actually turned out to be a success.
Character Review
1. I listed and numbered the names of 7 of the characters that were mentioned in previous episodes on the board.
2. I tore copier paper into fourth's and wrote a number (1 - 7) on each paper.
3. Students found their partner for the day (I use the Amigos de Sudamérica map from Bryce Hedstrom's website).
4. Each pair of students received a number of a character. Then they wrote as many sentences (minimum of 2) about the character. Most groups wrote 3-4 sentences.
5. I collected their sentences and then read them to the class, making corrections as needed.
6. The students told me the number or name of which character was described.

I read one sentence per paper, students told me the name of the character, and then I crossed out that sentence and read a sentence from the next paper. I kept circulating through the papers until all the sentences were crossed out. It turned out to be a great activity with 2 reviews built in: when students wrote the sentences and the Comprehensible Input when I read the sentences.

Below are the words and stories made to prepare for episode 7:
- no sé
- una cosa rara
- tiene mucha curiosidad
- hay mucha sangre

Additional photos: the "funeral" of Tomás Tomate (2nd half of Epiosde 7) 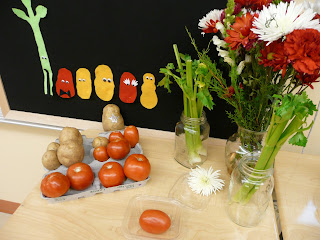 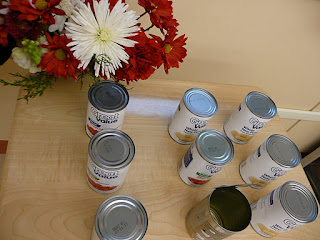 The student story doesn't have an appropriate ending because we ran out of time in class and we were ready to move on the next day.

(P.S. - The name of the girl, "Babalía" is my creation. A student in my upper level class had asked me that week how to say "drool". I didn't know so I looked it up. Using the name "Babalía" in a story for Spanish 1 not only helped make that word concrete in my mind, but when I tell my students in Spanish 1 next week what "baba" means, I'm fairly certain that they will not have to do any work to acquire that word because it will already be associated with "Babalía".)
Posted by Señora Hitz at 11:13 AM