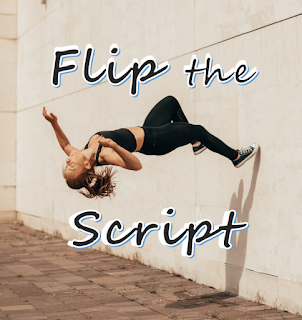 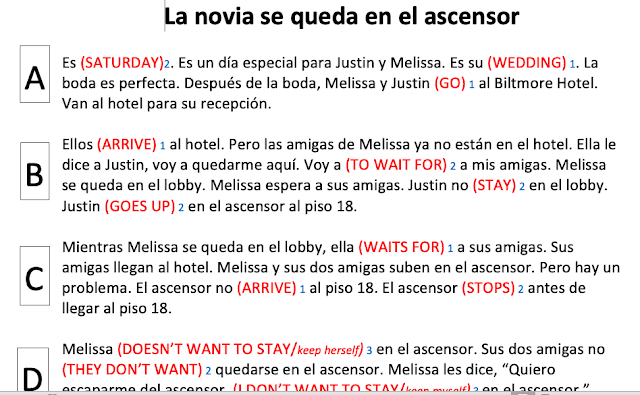 3. Depending on your class size, tell students to form groups of 2-4. Three works best; 4 is probably too many because it makes it too easy for one of the group members to not participate.
4. Groups take turns. The first group chooses any word/phrases in parenthesis. They discuss the answer in their group, then one of the members writes the answer on a mini-whiteboard. If they are correct, they earn the points listed for that word/phrase. If they are wrong, their turn is over and the next group chooses a word to translate.
It is NOT a race. The teams take turns and that same rotation continues until all the words have been translated to Spanish.
The letters on the side are there so students identify the paragraph with the letter and then say which word they in English they translated to Spanish before showing me their whiteboard.
Advantages of FLIP THE SCRIPT:
- Students discussed the answers
- For many sentences the students had to read the full sentence to know WHO is doing the action
- Students stayed focused whether working on the word they chose or glancing at what other groups wrote
- There is strategy involved; there were some groups that were leading with points that chose a 1 point word of which they were sure instead of choosing one they were not sure of.
- No pressure - teams can earn points each time when choosing the easier words - slow and steady wins the race (as what happened in one of my classes today).
Disadvantage of FLIP THE SCRIPT:
- The students in school played the game while students at home did another assignment. I'm not sure how to include the students at home without them having the advantage of looking up the words.
Posted by Señora Hitz at 9:11 PM